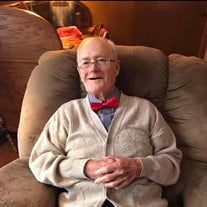 Nottingham – Dr. Verlin Wesley “Wes” Balsiger, Jr., DDS, 85, of Nottingham, NH and a former longtime resident of Hampton, NH, passed away peacefully on Saturday, August 14, 2021. He was born March 12, 1936 in Watertown, SD, son of the late Verlin W. C. and Monemia A. (Evans) Balsiger. In the summer of 1945, he became the big brother to Charles W. Balsiger. Wes loved growing up in Watertown with all of his extended family of grandparents, aunts, uncles and cousins. At the tender age of 14, he won the South Dakota state driving competition, having developed his skills early on by driving his grandfather around and driving the family bakery truck. Some of his favorite memories were all of the holiday meals at Grandma’s, Aunt Ma’s and Aunt Vonnie’s houses, enjoying plenty of Tom and Jerry batter which was accompanied by generous amounts of either dark rum or brandy. According to one of his closest friends, they’d even go raid the bakery after various school events just to get a “sweet treat’ with Wes leading the way! Wes graduated from Watertown High School and enlisted with the US Navy serving as a Dental Technician Second Class, wanting to pursue a career in dentistry because of his Uncle C.B. Wiles’ influence. During his enlistment, he was stationed at the Naval Hospital in Philadelphia (from which some great stories were born) and also in San Juan, Puerto Rico, where he worked as a DJ part time, a semi-professional baseball umpire, and met his first wife, Lydia Ferrer. After his enlistment ended, Wes enrolled and graduated from the University of South Dakota at Vermillion, where he held various jobs, including being a firefighter for the railroad. While in Vermillion, he welcomed his daughter, Jayne Elizabeth into the world before moving to Kansas City, MO to pursue his graduate work at the University of Missouri at Kansas City Dental School. It was during this time his son Daniel Wesley was born. He also worked for the Kansas City Police Department, with one of his favorite tours of duty being with the Kansas City Athletics before they moved to Oakland. After dental school, he was stationed in San Diego, where he was given orders to Viet Nam for a one year tour as a medic with the Marines. After returning home, he loved spending time teaching sailing in San Diego Harbor and socializing at the B.O.Q. (Billeted Officers Quarters) where he ended up meeting a Navy nurse named Therese, from Cambridge, Massachusetts. They were married in July of 1973 and had a son, Verlin Wesley, while still in San Diego. After leaving 16 years of service in the Navy, Wes opened a dental practice in Springfield, MO before re-entering military life for 8 years in the Army, serving 3 3-year tours in Alabama, Germany and retiring from Ft. Bragg, NC in 1988, effectively ending his military career as a veteran of the Korean and Viet Nam wars. In 1988, after his retirement from the US Army he made his home in Hampton, helping to care for his in-laws for the remainder of their days. It was in Hampton where Wes was very involved in church choirs, becoming a member of Bethany Church in Greenland, NH and also attending the United Church of Christ in North Hampton, NH where he enjoyed singing in their choir also. He was an active member and past president of the Hampton Area Lions Club as well as a member of Hampton’s American Legion Post 35. Wes could always be found walking along the sea wall in his reflective vest and head band, or riding his scooter along the coast and through town. He loved traveling to visit friends and family for the holidays or summer vacations and one of his greatest joys was hearing about or watching his kids compete in either track, wrestling, skydiving or baseball. In the latter years of their 38 year marriage, he spent a lot of time fishing and traveling with Therese, whenever they could, and never left her side when she was diagnosed with cancer. He drove her wherever she needed, from Exeter, NH to Boston and all the way to Philadelphia for her treatment until her passing in December of 2011. Wes was also predeceased by his son, Daniel, of San Diego and his parents Verlin W and Monemia (Evans) Balsiger. He is survived by his daughter Jayne (Steve) E. Romyn, of Boulder, CO, his son Verlin (Jennifer) W Balsiger III, of Nottingham, NH, brother Charles (Kathy) Balsiger, of Norfolk, NE, 4 granddaughters: Delaney Romyn, Zoe Romyn, Chloe Balsiger and Baylee Balsiger, 4 nieces and many cousins. A Celebration of Life will be held on Thursday September 16, 2021 at 10AM in the Bethany Church, 500 Breakfast Hill Rd., Greenland, NH, with a reception to follow in the rotunda. Burial with full military honors will be held at 2PM in the New Hampshire State Veterans Cemetery, Boscawen, NH. In lieu of traditional remembrances, donations may be made to Alzheimer’s Disease Research at the Bright Focus Foundation

The family of Dr. Verlin Wesley Balsiger Jr. created this Life Tributes page to make it easy to share your memories.

Send flowers to the Balsiger family.