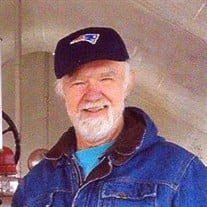 Seabrook – Vern Martin Knowles, 64, of Seabrook, died peacefully on Sunday, September 4 2016 at Massachusetts General Hospital, Boston. He was born October 29, 1951 in Exeter, a son of the late John F. and Dorothy (Humes) Knowles. Raised in Seabrook, Vern graduated from Winnacunnet High School with the Class of 1969. Following graduation he enlisted in the United States Airforce, where he served four years active duty and later many years in the reserves, retiring in 1990. He worked many years as a machinist at Kelley Airforce Base in San Antonio, TX and later Southwest before returning home to Seabrook to marry his true love and wife of 5 years Linda Louise Knowles. Vern loved playing guitar, especially with his brothers and was member of the Pine Crest Country Boys band. He also enjoyed golf, woodworking, antique car restoration and remodeling homes, but his greatest joy was spending time with family and friends, In addition to his wife Linda Louise Knowles of Seabrook, family members include his children, Roy Knowles and his wife Liz of San Antonio, TX, Nikko Delgado and her husband Paul of Adkins, TX and Jason Knowles and his wife Karen also from Adkins; siblings, David A. Knowles and his wife Nancy of Seabrook, Joan E. Knowles of Seabrook, Lucy Woodes and her husband Robert of Hampton Falls, Judy A. McNally and her husband Franklin of Exeter, Franklin C. Knowles and his wife Gretchen of Epping, John F. Knowles Jr. and his wife Sally of Kensington, Cheryl M. Martin and her husband Philip of Rockland, CA and Edward M. Knowles of Rochester; sister in law Margie Knowles of Elkhart, IN; 8 grandchildren and many nieces and nephews. In addition to his parents he was predeceased by his siblings, Dorthea J. Cartier, Jean Bertrand and Forest Knowles. At Vern’s request all services will be private.

The family of Vern Martin Knowles created this Life Tributes page to make it easy to share your memories.

Send flowers to the Knowles family.