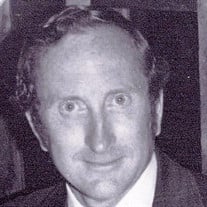 Seabrook – Vernon R. Small, 87, of Seabrook passed away on Saturday, September 26, 2015 at the Hyder Family Hospice House in Dover, after a long illness. Vernon was born in Seabrook on April 26, 1928, a son of the late Andrew G. and Bernice T. (Fowler) Small. He attended Seabrook schools and graduated from Amesbury High School in 1946. He attended Haverhill Trade technical school and was a licensed Master Electrician. Vernon was well known in Seabrook and the surrounding towns as a self employed electrician for over 60 years. In 2014, he was honored by the Town of Seabrook Selectmen with an award for 40 years of devotion to his community that included being considered the town electrician and assisting the town to complete many electrical projects. He was a member of the Planning Board for two decades, and an original member since 1980, of the Seabrook Recreation Commission that oversaw the Recreation Department, as well as its Scholarship Committee. He was a member of the Trinity United Church, Seabrook, where just a few years ago he helped to electrify the church steeple. He was a lifetime member of the Seabrook Fireman’s Association. He was a charter member of the Seabrook Bank and Trust where he served on the Board of Directors. He was a 50-year member of St. James Lodge #102 F. & A.M. of Hampton and a long time member of the Scottish Rite Bodies. He shared over 55 years of marriage with his wife, the late Elsie M. (Fowler) Small, who predeceased him in 2005. They enjoyed traveling, especially to Lake Winnipesaukee, California and Florida to visit with family and friends. He leaves his son, Vernon R. Small Jr. of Hercules CA, and his daughter Elaine Lentz and her husband Robert of Seabrook,; his grandson James Lentz and his wife Nicole of Camp Lejeune NC, and his granddaughters Rachel Small of Hampton, Andrea Walker and her husband Christopher of Rodeo, CA, and Devon Small of Garberville, CA; his great grandsons Hunter and Collin Lentz and Braydon and Ryan Walker, and many nephews and nieces. In addition to his wife, he was predeceased by his sister Viola B. Brown and his brother Andrew C. Small. Visiting hours will be from 4 to 7 P.M. on Thursday, October 1, 2015 in the Remick & Gendron Funeral Home – Crematory, 811 Lafayette Rd., Hampton, NH. Services will be held at 11 A.M. on Friday, October 2, in the Trinity United Church, 103 Lafayette Rd., Seabrook. Burial will follow in the Hillside Cemetery, Seabrook. Relatives and friends are respectfully invited. In lieu of flowers, donations may be made to the Alzheimer’s Association, 166 South River Road, Suite 210, Bedford, NH 03110 or to the Friends of Hyder Family Hospice House, 285 County Farm Rd, Dover, NH 03825.

Seabrook &#8211; Vernon R. Small, 87, of Seabrook passed away on Saturday, September 26, 2015 at the Hyder Family Hospice House in Dover, after a long illness. Vernon was born in Seabrook on April 26, 1928, a son of the late Andrew G. and Bernice... View Obituary & Service Information

The family of Vernon R. Small created this Life Tributes page to make it easy to share your memories.

Seabrook – Vernon R. Small, 87, of Seabrook passed away on Saturday,...

Send flowers to the Small family.