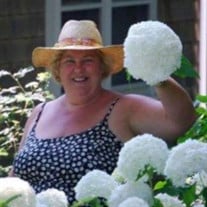 North Hampton – Vilma J. “Jeannie” Merrill, 54, of North Hampton, died at her home on Sunday, September 11, 2016. She was born on February 11, 1962 in Winchester, MA, the daughter of William B. Merrill of Wilmington, MA and the late Vilma Y. (Bedell) Merrill. Jeannie was raised in Wilmington and graduated from Wilmington High with the Class of 1980. She attended Salem State College and earned her cosmetology certificate from Wilfred Acadmy. She relocated to NH in the early 1980’s and worked as stylist for many years across the seacoast. Most recently, Jeannie worked as a hairdresser at Bliss 360 Salon in Hampton, where she was loved by both longtime clients and colleagues. She loved people and people loved her. Jeannie was a big-hearted lady, famous for her hugs, and would help anyone in their time of need. She had a green thumb, was an amazing gardener and a great cook. Her family will miss those giant breakfast/brunch buffets where there was always too much food. Jeannie loved her trips to Bremen, ME and staying at the oceanfront family cottage built by her great grandfather. She loved to swim, no matter how cold the water, a trait she has passed on to her children. Jeannie was an active and faithful member of the United Church of Christ in North Hampton. She had a great love of music from musicals, to the Grateful Dead, and beyond. Jeannie will be deeply missed by her family, her many friends and all the people she met through her work. In addition to her father, family members include her children, Elisabeth Jeffs and her husband, Daniel of Kingston, Jon Bassett, Jr. of North Hampton and William Bassett of Keene; her brother William Merrill and his wife, Lee Ann of Windham; her many nieces and nephews and her expectant granddaughter, due in November. Visiting hours will be from 4 to 7 PM on Friday, September 16, 2016 in the Remick & Gendron Funeral Home-Crematory, 811 Lafayette Road, Hampton. Services will be held at 11 AM on Saturday at the United Church of Christ, 295 Atlantic Ave., North Hampton. Relatives and friends are respectfully invited. Burial will be private. If desired, memorial donations may be made to the mission program at her beloved church, UCC North Hampton, 295 Atlantic Ave., North Hampton, NH 03862.

The family of Vilma J. "Jeannie" Merrill created this Life Tributes page to make it easy to share your memories.