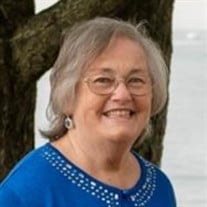 Hampton Falls - Virginia A. "Ginny" (Titcomb) Riley, 75, of Hampton Falls, passed away August 31, 2021, in her home, surrounded by loved ones, after a brave battle with cancer. Ginny is survived by her husband of 55 years, Richard Riley, of Hampton Falls, two daughters, Bridget Riley of Seabrook, Kelly South and her husband Michael of Middleton, NH, grandson Devin Riley of Hampton Falls, and 4 step-grandchildren; mother Rebecca Titcomb of Kensington, brother Harlan Titcomb, Jr. and his wife Margaretta, sisters Brenda Roy and her husband Bob, Ivy Burditt and her husband David, Dutch Felch and her husband Chet, Kathy Campbell and her husband Bryan, sister-in-Law Diana Tuttle and numerous nieces and nephews. Ginny was born on March 29, 1946. She graduated from Amesbury High School in 1965. Following graduation, she went on to become a bookkeeper, first at Ames Department Store and more recently at Seacoast Mills Building Supply. Ginny had a love for family and a strong passion for horses since a young age. She enjoyed trail riding, horse shows, and cooking with her grandson. In their earlier years, Ginny and Rick went on many motorcycle adventures. She was a nurturer, kindhearted, compassionate, a loving wife, mother, grandmother, daughter, sister, aunt and friend. She touched the lives of many and will be missed dearly. Virginia is predeceased by her father Harlan Titcomb, biological mother Alberta Dunbrack, sister Claudia Abrahams and brother Gary Tuttle. Visiting hours will be held from 5-8 P.M. Tuesday, September 7, 2021 at the Remick & Gendron Funeral Home-Crematory, 811 Lafayette Road, Hampton. Services will be held at 11 A.M. Wednesday, September 8, 2021 at The Hampton Falls First Baptist Church, 3 Lincoln Avenue, Hampton Falls. Burial will follow in the Hillside Cemetery Seabrook. In lieu of traditional remembrances donations may be made to Rockingham VNA Homecare Hospice

Hampton Falls - Virginia A. "Ginny" (Titcomb) Riley, 75, of Hampton Falls, passed away August 31, 2021, in her home, surrounded by loved ones, after a brave battle with cancer. Ginny is survived by her husband of 55 years, Richard Riley, of... View Obituary & Service Information

The family of Virginia A. Riley created this Life Tributes page to make it easy to share your memories.