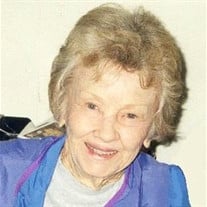 Hampton - Virginia E. Thompson, 91, of Hampton and formerly of Somerville and Revere, MA, died peacefully on Wednesday, November 25, 2015. Virginia was born in Huntington Park, CA, a daughter of the late Harry and Rebecka (Arthur) Trevethan. Shortly after attending college she enlisted in the United States Coast Guard where she met her beloved late husband, Richard E. Thompson. They were married shortly after their discharge and spent over sixty years together. Richard died in 2006. Virginia had many interests and hobbies. Every craft project she undertook was done with meticulous attention to detail and completed to perfection. She loved politics, followed the space program, read the daily newspaper from cover to cover and loved art, architecture, books and movies. When she retired she spent many hours in her beautifully landscaped yard. She retired from the Chelsea District Court as the Clerk-Magistrate's assistant in her mid-seventies. She was a member of American Legion Post 19 of Somerville and Post 67 of Newmarket. Virginia is survived by her son, Richard Thompson of Virginia Beach, VA; her daughters, Sheila (DeFranzo) Caruso and her husband Robert of North Hampton and Bonnie Delaney and her fiancé, Larry Loiselle of Hampton. She also leaves her eight grandchildren, Sheila Gruchy and her husband Michael of Berkeley Springs , WV, Valerie Matney and her husband Shawn, April Rooney and her husband Jeff and Corey Thompson, all of Virginia Beach, David DeFranzo and his wife Rebecca Tracy of St. Charles, IL, Susan (DeFranzo) Wyse and her husband Derek of Newmarket, Lauren DeFranzo of South Boston and Molly Delaney of Hampton; her great grandchildren, Brenna and Paige Rooney of Virginia Beach and William Michael DeFranzo of St. Charles, IL. Additional family members include her Stepfamily, Virginia Thompson of Virginia Beach, William DeFranzo of Hampton and Paul Delaney of Swampscott, MA. In addition to her parents and her dear husband, Virginia was predeceased by her brother, William and her sister, Adeline Gordon. At Virginia’s request, all services will be private. Burial will be next to her husband, Richard, in the New Hampshire State Veterans Cemetery. In lieu of flowers, the family suggests memorial donations to either of Virginia's favorite charities: The Salvation Army, NH Core Community Center, 28 Depot Square, Hampton, NH 03842 or Little Sisters of the Poor, Jeanne Jugan Residence, 186 Highland Ave., Somerville MA 02143.

The family of Virginia E. Thompson created this Life Tributes page to make it easy to share your memories.

Hampton - Virginia E. Thompson, 91, of Hampton and formerly of...

Send flowers to the Thompson family.