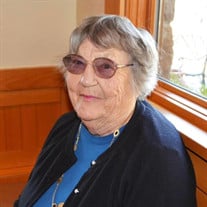 Eastbrook, ME – Virginia Rose French Wilbur, 96, of Eastbrook, ME, passed away quietly on Monday, December 13, 2021 at the Exeter Hospital in New Hampshire. She was born March 29, 1925 in Eastbrook, Maine, the only daughter of Decatur and Nina Page French. She married the love of her life, Gerard B. Wilbur, in 1948 and they shared many adventures for 42 years until Gerard’s death in 1990. Virginia graduated from Belfast High School in 1941. She later graduated from Providence Bible Institute, attended Gordon College, and received her BA in Education from the University of Maine in Orono. She was a lifelong lover of education, teaching for over 50 years before retiring at the age of 83. She taught elementary school in North Penobscot, Long Ridge, Burlington, Northeast Harbor and several Christian schools. She ended her career teaching adult education in Ellsworth, Maine. She was a member of the national honor society for teachers and was named teacher of the year by adult education when she was 79 years old. Virginia was involved in Christian ministry most of her life. As a college student she directed VBS in many small towns in Northern, New England. When her husband went into the ministry she served as a minister’s wife in Burlington, Eastbrook, Lamoine, Trenton, and Franklin, Maine. She also served as a mother figure to many children that frequented her home on the lake. She faithfully cared for her husband, her father, her aunt, and her mother in the last years of their lives. Virginia is survived by her daughter, Sandra Bauer of Hampton, NH, her son Randall Wilbur and his wife Barbara of Eastbrook, Maine, and a woman she thought of as a daughter, Amanda Raymond and her husband Arthur. She is also survived by her brother, Ivan French and sisters-in-law, Eleanor Brooks and Florence French. She has seven grandchildren: Cynthia Bauer, Michelle Falvey, Minna Bauer, Michael Wilbur, Andrew Bauer, Lisa Allen, and Julie-Ann Burkhart. She has 10 great-grandchildren and several nieces and nephews. She was pre-deceased by her parents, her husband Gerard, her brother Phillip French, her son-in-law Richard Bauer, and her great grand-daughter Ellie Bauer. Services will be held on January 15 at 1:00 at the Franklin Baptist Church, 4 Main St, Franklin, ME 04634, with a snow date of January 22 with a time of fellowship after the service at the church. In lieu of flowers, memorial donations may be made to Kupenda for the Children, PO Box 473, Hampton, NH 03843.

Eastbrook, ME &#8211; Virginia Rose French Wilbur, 96, of Eastbrook, ME, passed away quietly on Monday, December 13, 2021 at the Exeter Hospital in New Hampshire. She was born March 29, 1925 in Eastbrook, Maine, the only daughter of Decatur... View Obituary & Service Information

The family of Virginia Rose Wilbur created this Life Tributes page to make it easy to share your memories.

Send flowers to the Wilbur family.