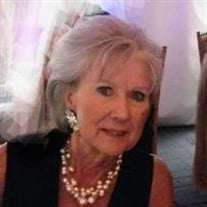 Hampton, NH - Vivianne G. (Tremblay) Marcotte, a well-known resident of Hampton and past resident of Lowell MA, passed away on January 25, 2022 at her home, surrounded by her loving family. Born in Lowell, MA on March 30, 1935, she was the daughter of the late Joseph E. Tremblay and Blanche (LaPlante) Tremblay Dozois. She was raised in Lowell and graduated from Lowell High School in 1953. Vivianne was a Carney Medalist at Lowell High, an honor of academic achievement, and was also recipient of the Math prize, a rarity for a girl at that time! She went on to graduate from Tufts/Forsythe School of Dental Hygiene and worked as a Dental Hygienist prior to marrying and raising a family. While in Lowell, MA and later in Hampton, Vivianne was involved in the community and in the church. She served as PTA president in Lowell Public Schools, initiating many successful changes and fundraisers. After moving to Hampton, she was very involved with the former St. Francis Retreat Center and volunteered at their Tao Book and Gift Shop. As a daily Mass communicant, St. Theresa Church in Rye Beach, NH was an important part of her life. There she managed the Lighthouse Catholic Media program, maintained beautiful altar cloths, served as a Eucharistic minister and was involved in numerous church activities. Vivianne worked tirelessly for many years on the Hampton Conservation Commission. In her tenure as Chair of the Conservation Commission she initiated the grants process that allowed her to begin the salt marsh restoration projects which help protect much of the town from flooding and sea level rise. She brought the commission into the digital age making it a professional commission devoted to protecting the town’s natural resources and educating property owners on protecting their own properties. In one of her last acts as Chair she initiated the purchase of the Development rights to the Hurd Farm. This began a process of purchases of conservation land and development rights that continues in Hampton to this day. She was the wife of the late Atty Albert J. Marcotte. Most important to her were their six children. She was the loving mother of Roberta Marcotte of Hampton, NH; Richard Marcotte of Pepperell, MA; Philip Marcotte and his wife Christine of Chelmsford, MA; Paula Molloy and her husband Daniel of Ridgefield, CT; Peter Marcotte and wife Joanne of North Hampton, NH and Atty David Marcotte of Hampton, NH. She is also survived by her fifteen grandchildren, Atty. Michael Molloy (Lauren), Elizabeth Kirkpatrick (Matthew), Melissa Reardon (Edward), Nicholas Marcotte, Matthew Marcotte, Julia Marcotte, Amanda Marcotte, Joshua Marcotte, Alex Marcotte, Zachary Marcotte, Brittany Schnaars (Andrew), Richard Marcotte, Sarah Marcotte, Hannah Marcotte, and Thomas Marcotte; six great grandchildren, William and Emma Kirkpatrick, Connor and Logan Molloy, Myles Marcotte and Dominic Reardon. She also leaves her beloved sister Jeanne Marchand of Florida, nephews Joe and John Huard, Steve Marchand, Ron Tremblay, nieces Joyce McEnerney, Judy Kodish and many dear friends. Her grace, her love and her friendship will be forever missed. Visiting hours will be from 5 to 7 pm on Monday, January 31, 2022 in the Remick & Gendron Funeral Home – Crematory, 811 Lafayette Rd., Hampton, NH. A Mass of Christian Burial will be celebrated at 11 am on Tuesday at the St. Theresa Church, 815 Central Rd., Rye Beach, NH. Burial will follow at 1:30 pm in St. Joseph Cemetery, Chelmsford, MA. The Mass will be livestreamed at https://www.sainttheresachurchrye.org/live-streaming. Masks are required for those attending. In lieu of flowers, the family suggests memorial donations to the St. Theresa Church, 815 Central Rd. Rye Beach, NH 03870.

Hampton, NH - Vivianne G. (Tremblay) Marcotte, a well-known resident of Hampton and past resident of Lowell MA, passed away on January 25, 2022 at her home, surrounded by her loving family. Born in Lowell, MA on March 30, 1935, she was the... View Obituary & Service Information

The family of Vivianne G. Marcotte created this Life Tributes page to make it easy to share your memories.

Send flowers to the Marcotte family.