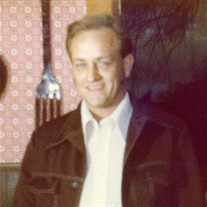 Seabrook – Wallace M. “Babe” Eaton, III, 69, of Seabrook, passed away peacefully on Sunday, May 22, 2016 at the Exeter Hospital. He was born in Newburyport, MA on December 10, 1946, a son of the late Wallace M. and Leola R. (Janvrin) Eaton, Jr. Babe was a lifelong resident of Seabrook and a veteran of the United States Air Force. After his service years he worked as a set-up machinist at the Bailey Corporation and as an automobile mechanic for Watt’s Garage, L&W Auto Repair and owned and operated Babe’s Garage in Salisbury, MA. He had also been employed as a commercial auto parts manager at Auto Zone and NAPA Auto Parts. It was at Bailey Corporation where he met and fell in love with Patricia, his companion and wife of over 43 years. In past years Babe had been very active with the Raymond E. Walton American Legion Post 70 of Seabrook. He was a past commander, a lifetime member of the Son's of the American Legion Squad 70, a member of the honor guard and enjoyed coming up with new ideas for their many fund raising events over the years. A true dog lover, Babe always had a faithful companion by his side. He was an honest, hard-working man and a great provider for his family. He enjoyed being out on the ocean fishing and NASCAR racing. In addition to his beloved wife, Pat, Babe is survived by his son, Richard Eaton and his wife Lori of Seabrook; his daughters, Gina Gaffney and her husband, James Pontoo of Seabrook and Heather Handy and her husband, Ted of Amesbury, MA and his half-sister, Audine Donahue and her husband, Blair of Seabrook. He also leaves his grandchildren, Matthew, Shawn, Tony, Ben, Amy Lee and Adam, his great grandson, Caleb and his special extended family, Rob and Carrie Marr and their children, Anthony and Laura. Family and friends may visit from 3 to 6 pm on Monday, May 30, 2016 in the Remick & Gendron Funeral Home – Crematory, 811 Lafayette Rd., Hampton. Burial will be private in the Wildwood Cemetery, Seabrook. In lieu of flowers, memorial donations may be made to the New Hampshire SPCA, PO Box 196, Stratham, NH 03885.

The family of Wallace M. "Babe" Eaton, III created this Life Tributes page to make it easy to share your memories.