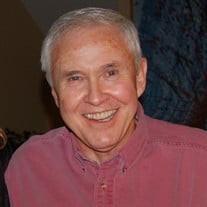 Eliot, ME - Walt Ayre, 81, of Eliot, died May 18, 2020 peacefully at home after a long battle with prostate cancer. He was born in Laconia, NH on December 20,1938, a son of the late Walter and Mildred (Gray) Ayre. Walt graduated from Laconia High School and the University of New Hampshire. His first career was in textbook publishing where he started in sales in New England and later served as product manager and associate publisher for Addison-Wesley in Palo Alto CA. Walt’s second career was in Exterior Insulation and Finish Systems (EIFS). He was a District Sales Manager in Atlanta, GA, CA Regional Manager, and returned to GA as National Accounts Manager. Walt and wife Pat returned to their roots in Eliot prior to retirement to be with their grandchildren. After a triple bypass surgery, he retired fully. He was an avid skier and enjoyed meeting up regularly with ski buddies at Gunstock until he was 80. Walt could often be seen at antique auto shows with his 1964½ Mustang, of which he was the proud original owner. They also enjoyed traveling south along the east coast in their Rialta each winter visiting family and friends along the way. Alcoholics Anonymous (AA) was an important part of Walt’s life as he was very connected through regular meetings. He credits his 35 years of sobriety for helping him to love life and appreciate family. Walt maintained lifelong friendships and was loved by everyone he met. Walt had special connections with his brother, Al’s family, extended family in CT, FL and WA, and all the Doyon clan from the Strafford/Dover NH area. He was a big fan of his grandsons’ sports and attended as many of their activities as he could. He was “Papa” to many of the boys’ friends and their families who enjoyed his stories and infectious laugh. Walt is survived by his wife of 55 years Patricia (Supsinkas) Ayre, brother Albert Ayre (wife Gail) of South Portland, ME, daughters Alicia Ayre of Marietta, GA and Jennifer Ayre Doyon (wife of Chris Doyon) of Eliot, daughter-in-law Whitney Ayre (widow of Stephen Ayre) of Dallas, GA and his beloved grandchildren, Zach and Adam Doyon of Eliot and step-grandson Aidan Simmons of Dallas,GA. In addition to his parents, Walt was pre-deceased by his son Stephen Ayre and granddaughter Jamie Marie Doyon. A private Celebration of Life will be held at the Eliot home of Chris and Jennifer Doyon. “See you on the tour!” - Walt We’ve arranged a "Wave Goodbye to Walt" drive by memorial this Saturday, May 23rd, the day after Pat & Walt's 55th wedding anniversary. Walt's Mustang will be on display in their driveway at 1398 State Rd in Eliot from 12 to 2 p.m. Please take a drive by in observance and feel free to stop briefly to place a flower, a photo, a memory, or a message to the family in the car. If you want to walk by, it would be safest to park at the library and use the sidewalk and crosswalk to get to the house.

Eliot, ME - Walt Ayre, 81, of Eliot, died May 18, 2020 peacefully at home after a long battle with prostate cancer. He was born in Laconia, NH on December 20,1938, a son of the late Walter and Mildred (Gray) Ayre. Walt graduated from Laconia... View Obituary & Service Information

The family of Walter S. Ayre Jr created this Life Tributes page to make it easy to share your memories.

Send flowers to the Ayre family.