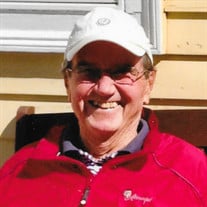 Hampton – Walter V. Demers Jr., 89, of Hampton, died peacefully in his sleep early Wednesday morning on August 15, 2018 at Exeter Hospital. He was born in Lawrence, MA on October 31, 1928, the son of the late Walter Demers Sr. and Margaret (Hagerty) Demers. Raised in Lawrence, he graduated from Punchard High School, did a post grad year at Kimball Union Academy, and graduated from Yale University in 1951. After college, he worked with his father at Lawrence Plate Glass Company, created Eastern Garage Door, and went on to run the family business. His many loyal employees are what made his business special. Walter was an avid golfer, his only regret in life was that it was his beloved wife Lois got their only hole in one. He had a great appreciation for life, loved current events, was a sports enthusiast, made friends easily, was highly intelligent, well read, compassionate, optimistic, charitable, civic minded, patriotic, handsome as a movie star, and the funniest man his family ever knew. He was modest man, who was very active in local charities and civic affairs. Family meant the world to Walter. He met his wife Lois, on Hampton Beach in 1948. They were married in 1952 and went on to create their biggest fan club consisting of their children, Holly, Walter, Susan, Ellen and Karen, and their spouses and children as well as his sister, Joyce. They moved from North Andover, MA to Hampton in 1990, and the house became the focal point and soul of his family, hosting family gatherings on July 4th, impromptu night beach visits and a gathering spot for the grandchildren. He leaves behind Lois, his wife of 65 years; 5 children; 14 grandchildren, 4 step-grandchildren, 5 great grandchildren and 4 great step-grandchildren. When asked by one of his end of life care nurses, “Walter, did you have a good life?” he responded “the best!” Visiting hours will be held from 5 - 7 PM on Tuesday, August 21, 2018 at the Remick & Gendron Funeral Home-Crematory, 811 Lafayette Road, Hampton. Relatives and friends are respectfully invited. In lieu of flowers, donations may be made to the Walter V. Demers Sr. Scholarship Fund, c/o Merrimack College, 315 Turnpike Street, North Andover, MA 01845. Please visit www.RemickGendron.com to view Walter’s memorial website, sign his tribute wall or for directions.

Hampton &#8211; Walter V. Demers Jr., 89, of Hampton, died peacefully in his sleep early Wednesday morning on August 15, 2018 at Exeter Hospital. He was born in Lawrence, MA on October 31, 1928, the son of the late Walter Demers Sr. and Margaret... View Obituary & Service Information

The family of Walter V. Demers Jr. created this Life Tributes page to make it easy to share your memories.