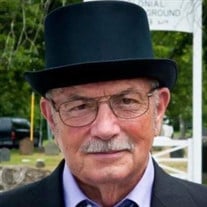 Seabrook – Walter Stanley "Tinker" Janvrin Jr., 80, of Seabrook, passed away peacefully at his home, surrounded by those who he loved, on Wednesday, January 26, 2022. Walter was born in Portsmouth on December 8, 1941, a son of the late Walter and Martha (Durant) Janvrin Sr. and shared over 50 years of marriage with his late wife, Donna L. (Marsh) Janvrin, who died in 2012. Walter was raised in Seabrook. He was a member of UAW Local 1913, working as a tool & die maker for Bailey Corp., worked as a part-time police officer and ambulance attendant with the Seabrook Police Department during the 1970s and later served as the department custodian for many years. A man with many hats, Walter also worked with Dick Merrill plowing snow in Hampton Falls, served as a security officer at the Seabrook Greyhound Track, cooked at Lamie’s Tavern and Mac’s Clam Bar and along with Donna, managed the Seabrook BMX track for a time. Walter was a huge NASCAR fan and he also enjoyed hunting, fishing, snowmobiling, yearly trips to Pennsylvania, racing at Lee and Star Speedways, dancing and playing cards with his friends and family every weekend. He even raised horses for a time. Walter loved being part of the pit crew for his son Clyde’s race car and his daughter Vanessa’s BMX racing. His favorite times were spent with family and he especially enjoyed going to his children and grandchildren’s many different events. He is survived by his daughters; Tarnya Cody and her husband Edward of Seabrook and Vanessa LeJeune and her husband Ian of Brentwood and his son, Clyde Janvrin of North Hampton and his partner, Dawnmarie Greenman of Hampton. Walter also leaves his brothers; Richard Janvrin and wife Marianne of Seabrook, Martin Janvrin of Dover and Steven Janvrin and wife Addie of Ft. Myers, FL, his sisters; Nancy Knowles and husband David of Seabrook, Janice Follansbee and husband Victor of Stratham, Andrea Thompson and husband, Joseph of Danville and Martha Laskey and husband, Alan of Nottingham, his special friends, Beverly and David Lattime, his 8 grandchildren; Matthew, James, Kahlia, Shailyn, Tyler (wife Cass), Jonathan, Ian Jr. and Vienna, his 4 great grandchildren: Calhan, Logann, Thomas and Amanda and many nieces and nephews. In addition to his parents and his wife, Walter was predeceased by his sister, Maureen Janvrin. Visiting hours will be from 5 to 7 PM on Wednesday, February 2, 2022 in the Remick & Gendron Funeral Home-Crematory, 811 Lafayette Road, Hampton. Services will be held at 11 AM on Thursday in the funeral home with burial to follow in Hillside Cemetery, Seabrook.

Seabrook &#8211; Walter Stanley "Tinker" Janvrin Jr., 80, of Seabrook, passed away peacefully at his home, surrounded by those who he loved, on Wednesday, January 26, 2022. Walter was born in Portsmouth on December 8, 1941, a son of the late... View Obituary & Service Information

The family of Walter S. "Tinker" Janvrin Jr. created this Life Tributes page to make it easy to share your memories.

Send flowers to the Janvrin family.