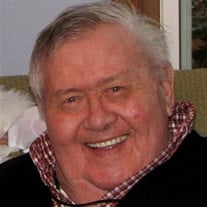 Rye, NH – Walter S. Peek, 93, of Rye, died peacefully Thursday, June 23, 2016 at his home surrounded by loving family. He was born in Portsmouth, August 18, 1922 a son of the late Walter J. and Etta (Bennett) Peek. Walter was a lifelong resident of Rye who graduated from Portsmouth High School with the Class of 1941. Mr. Peek served in the United States Army from 1942 to 1945, seeing action in the European Theater all the way from Normandy to Gera, Germany, during which he received a Silver Star amongst other medals. After his time in the Army he returned home and went to work at the Portsmouth Naval Shipyard as an inside machinist, before retiring in 1978. Walter was a lifetime member of the VFW and the Grange. Family members include his wife of 35 years Josephine (Fortin) Peek of Rye; sons, Walter S. Peek Jr. of Lincoln, ME, Benjamin F. Peek also of Lincoln, James H. Peek of Hampton Falls, Gordon L. Peek of Exeter, and Raymond B. Peek of Concord; daughters, Rebecca A. Peach of Lincoln, Sheryl L. Hanson of North Hampton and Deborah J. Knowles of Seabrook; stepson Robert Plourde of East Hampstead; stepdaughters, Denise Whitehair of San Antonio, TX and Paula Bernard of Derry; 19 grandchildren; 13 great grandchildren and many nieces and nephews. In addition to his parents he was predeceased by his first wife Roberta E. (Brown) Peek; brothers, Garland Peek and Lawrence Ray; sister Marion McCue and step grandson Michael Plourde. Visiting hours will be from 10 AM to 12 PM on Monday, June 27, 2016 in the Remick & Gendron Funeral Home – Crematory, 811 Lafayette Rd., Hampton, NH. Relatives and friends are respectfully invited. Burial will be private. If desired, in lieu of flowers donations may be made to The Veterans of Foreign Wars, 406 West 34th Street, Kansas City, MO 64111.

The family of Walter S. Peek created this Life Tributes page to make it easy to share your memories.

Send flowers to the Peek family.