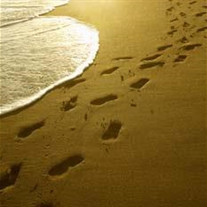 Hampton – Wanda Marie (Cyr) Buell, 94, of Hampton, died peacefully, surrounded by her family, on Wednesday, January 25, 2017. She was born in Fitchburg, MA on January 7, 1923 a daughter of the late Alfred Cyr and Laura E. (Gallant) (Cyr) Callahan. Raised in Fitchburg, Wanda graduated from Fitchburg High School, Class of 1941, and later attended Gardner Community College. Prior to her marriage, she worked as a telephone operator and as a receptionist at General Electric. For many years she was a dedicated and beloved tutor in the Orange and Amesbury, MA school systems. Wanda and her late husband, Marshall S. Buell, Jr., raised their family in Athol, MA and since 1964 enjoyed summers at Hampton Beach Trailer Park, one of her favorite places. She was happiest sitting on the beach with her family and many friends, hosting wine and cheese gatherings on hot summer afternoons. In 1950 she travelled to Rome and had a private audience with Pope Pius XII where she knelt before him and was “doubly blessed”. She traveled to Europe several times and particularly enjoyed the theater in London. Wanda was an avid theater goer and in the 1940s and 1950s she was an actress with the Stratton Playhouse in Fitchburg, MA and later became involved with the Firehouse Theater in Newburyport, MA. She belonged to several bridge clubs and she also lovingly knitted many treasured gifts for friends and family. In the late 1980’s to 2010, she and Marshall were the managers of Meadowstone Park in Seabrook, where they enjoyed many happy times. She leaves her loving family: her daughter, Laura E. Buell and her son, Robert E. Buell, of Hampton; her grandson, Jacob C. (Jake) Buell and his fiancé, Breann Nadeau, of Seabrook; her granddaughter, Molly T. Buell and her partner, Dylan McNicholas of Barrington, and several nieces, nephews, and many friends. Her children and grandchildren feel so very blessed that she was in their lives for so long. In addition to Marshall, her loving husband of nearly 53 years, Wanda was predeceased by her sisters, Eleanore Beaudoin, Caroline Raterman, Norma Fischer, and Constance Cyr. All through her illnesses, always a trooper, Wanda displayed extraordinary durability and perseverance. She was a devoted wife, mother, grandmother, aunt, sister, and friend. She was a devout Catholic, steadfast in her faith, which was a true blessing to whomever she touched. Wanda was happiest when everyone else was happy. Visiting hours will be held from 1-4 P.M. on Sunday, January 29, 2017 in the Remick & Gendron Funeral Home-Crematory, 811 Lafayette Rd., Hampton. A Mass of Christian Burial will be celebrated at 10 A.M. on Monday, at Our Lady of the Miraculous Medal Church, 289 Lafayette Rd., Hampton. Burial will follow in the Hillside Cemetery, Seabrook. Family and friends are respectfully invited. In lieu of flowers, donations may be made to Anna Jaques Cancer Center, One Wallace Bashaw Jr. Way, Suite 2001, Newburyport, MA 01950 or to Caretenders, 401 Andover Street, Suite 102, North Andover, MA 01845.

The family of Wanda M. Buell created this Life Tributes page to make it easy to share your memories.

Send flowers to the Buell family.