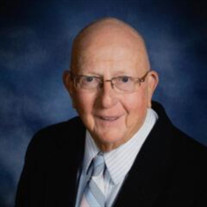 Hampton - Warren Thomas Bambury, 89, of Hampton, former longtime resident of Somerville, passed away on November 19, 2020. The son of the late Thomas J. and Mary Jane (Payne) Bambury, Warren graduated from Somerville High School before proudly serving in the U.S. Army during the Korean War as a member of the 5th Regimental Combat Team. Following his service, Warren returned to Somerville, where he married the love of his life, Georgina “Ina” (Smith), and earned his bachelor’s degree in business administration from Northeastern University, attending night classes while working and helping to raise his children. Warren enjoyed a long career as an accountant with the Commonwealth of Massachusetts Department of Housing and Community Development. He was deeply involved in Somerville politics throughout much of his adult life, serving on many committees and boards, and was one of the founding members of the Duhamel Education Initiative. Warren was also active in the First Church Somerville UCC, serving as a Deacon and on many church boards. Upon his retirement, he and his wife relocated to Hampton, NH, where his commitment to bettering his community and his devotion to his faith continued. Warren spent much of his time volunteering for local organizations, including the Rockingham Planning Commision and Transportation Assistance for Seacoast Citizens (TASC). Warren and Ina also became active members of the Hampton First Congregational Church. Warren delighted in helping the less fortunate, donating much of his time and money to those in need. He loved life on the coast, and when he wasn’t walking along the beach, he could be found spending time with his many family and friends. An avid sports fan, Warren followed all Boston teams, but he ate, breathed, and slept Red Sox, and would rarely miss watching a game. His sense of humor was one of his most famous traits, and he was quick to come up with a quip or a wisecrack to make people laugh, no matter the situation. Warren had a deep-seated love of music, and was always eager to raise his voice in song—whether joining with fellow churchgoers at Sunday worship or serenading a loved one with his own rousing rendition of “Happy Birthday.” A born raconteur, Warren loved sharing stories with family, friends, and strangers alike, chronicling childhood memories of his father’s life as a fisherman, or going to see the Boston Braves play for a nickel before they relocated to Atlanta. It didn’t matter if you’d known him for five minutes or fifty years ... from the second you met Warren, you felt like you’d been friends forever. Throughout his life, Warren led by example, always treating others with the same love, respect, and good will (as well as a generous dose of his famous quick wit). He was loving father to Linda Greenfield and her husband Steve of Salem, NH, Alison Bell and her husband Dave of Wilmington, MA, and Andy Bambury and his wife Mary of Andover, MA; devoted grandfather to Jeff Greenfield, Tom Greenfield and his wife Julie, Stephanie Wojcik and her husband Chris, Amanda Payette and her husband Jamie, Greg Bell, Dan Bell, Elizabeth Bambury, and Stephen Bambury; doting great-grandfather to Juliette Payette. Warren is also survived by his daughter-in-law Karen Bambury, sister-in-law Freda Smith, and several nieces and nephews. In addition to his parents, he was predeceased by his beloved wife of 64 years, Georgina “Ina” Bambury, son Warren “Ren” Bambury Jr., brothers Frank Bambury and Joseph Bambury, and sister Jean Osborne. The legacy and memories Warren leaves behind will continue to comfort those he loved. Interment will take place in a private ceremony at the New Hampshire State Veterans Cemetery in Boscawen. A memorial service will be held at a future date. In lieu of flowers, donations may be made to the Alzheimer's Association, Massachusetts/New Hampshire Chapter , 309 Waverly Oaks Road, Waltham, MA 02452; 800-272-3900 or a charity of your choice.

The family of Warren T. Bambury Sr. created this Life Tributes page to make it easy to share your memories.

Send flowers to the Bambury family.