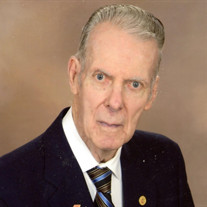 Hampton – Warren Alan White, 89, of Hampton, passed away peacefully on Tuesday, June 18, 2019 at Webster at Rye where he had been living with his beloved wife, Joyce Ann (Ramsey) White. Warren was born on December 24, 1929 in Newark, NJ; a son of the late George C. and Ruth A. (Riddle) White. His family made Irvington, NJ their home until Warren’s father’s passing in 1944. He and his mother relocated to Tampa, FL and soon after, Warren enlisted in the United States Marine Corps. After four years with the Marines, he moved back to Florida and attended the University of Tampa under the GI Bill. Aviation always interested Warren, so much so that he and a couple of friends hitched to Cincinnati, OH to apply for jobs at General Electric. Warren was hired by GE and began a long career in the aviation industry. He left GE and went to work for Pratt-Whitney in their Houston operations division, working with NASA in the design of fuel cells and rocket engines. His next moves were to Raytheon and then RCA until his retirement. As a longtime resident of Hampton, Warren was actively involved with his community. He was member of the United Methodist Church, American Legion Post 35, and Saint James Lodge No. 102. Warren was active in the Hampton Youth Association football program, founded Boy Scout Troop 176 and was a member of the Eagle Scout Board of Review. Above all else, Warren was a loving and devoted husband and father and a friend to many. He was always positive, had a wonderful sense of humor and provided a great role model for others. He will be sadly missed. In addition to Joyce, the love of his life for over 60 years, Warren is survived by his children, Karyn Ruth White, Craig White, Elizabeth Williamson, Chris White and Steve White. He also leaves his grandchildren, Kelsey and Jacob White, Elise and Cole Williamson, Jackson White, and Warren’s brother, Donald Curtis White and family.

Hampton &#8211; Warren Alan White, 89, of Hampton, passed away peacefully on Tuesday, June 18, 2019 at Webster at Rye where he had been living with his beloved wife, Joyce Ann (Ramsey) White. Warren was born on December 24, 1929 in Newark,... View Obituary & Service Information

The family of Warren Alan White created this Life Tributes page to make it easy to share your memories.