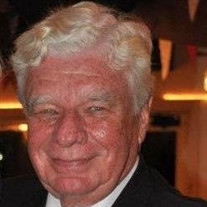 Stratham - Whitney Saidla "Whit” passed away peacefully in his home on June 23, 2016. He was born January 7, 1942 in Brooklyn, NY, son of the late Leo Erval Alexandre and Mary Fayette (Driggs) Saidla. Whit grew up in Sherman, CT and Huntington, NY. He was a long time resident of Stratham. He received his undergraduate degree from Tarkio College in MO, and graduate work continued at the Aix-Marseille Université, France and the New School, NY. Whit spent his early professional years as the owner of his own company building the first “unsinkable” sailboats. Regarded as a pioneer in the composite industry, he went on to build the 78 gate valve buildings for the Alaska Pipeline and modernize the shipping industry by inventing the first filament wound refrigerated cargo containers that could later be converted to refugee housing. Whit also developed new composite materials that are widely used in the automotive and aeronautical industries and in many household products today. During his lifetime of innovation he acquired more than twenty US and international patents. Over the past 35 years living in New Hampshire, Whit became a real estate developer and designer of custom homes. He was a proud member of the American Institute of Architects. His creativity in all things was appreciated by those who had the privilege of knowing him. He enjoyed helping his friends and always had an innovative solution at the ready. Sailing meant the world to Whit, having raced numerous times to Bermuda and spending many months sailing “Pyewacket” in the Caribbean with his family. He was a member of the Portsmouth Yacht Club for 40 years. Whit was also an avid gourmet cook, having studied at the Cordon Bleu in Paris. He loved to entertain, much to the delight of his friends and family. Whit's family is very proud of his lifelong accomplishments, and he will be remembered as a true renaissance man. Whether it be traveling to his favorite spots in France, applying his scientific mind in the kitchen or the laboratory, or pursuing his passion for sailing, Whit lived his life to the fullest! He will be missed dearly! Whit is survived by son Adam and his wife Christine of Arlington, MA, son Christian and his wife Katie of Epping, grandchildren Olivia and Reid, his former wife and good friend Pamela Saidla of Manchester, sister Josephine Morse of Center Harbor, and several nephews. A memorial service will be held at 1:00 PM Sunday, July 31, 2016 at the South Church, 292 State Street, Portsmouth. Relatives and friends are respectfully invited. Assistance with the arrangements was by the Remick & Gendron Funeral Home-Crematory, Hampton.

Stratham - Whitney Saidla "Whit&#8221; passed away peacefully in his home on June 23, 2016. He was born January 7, 1942 in Brooklyn, NY, son of the late Leo Erval Alexandre and Mary Fayette (Driggs) Saidla. Whit grew up in Sherman, CT and... View Obituary & Service Information

The family of Whitney Elliott Saidla created this Life Tributes page to make it easy to share your memories.