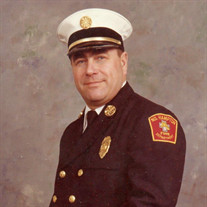 Merrimack – Former North Hampton Fire Chief, Wilbur D. Perkins, 84, of Merrimack and prior 37 year resident of North Hampton died peacefully on Thursday, March 16, 2017 at his home. He was born in Worcester, MA on March 7, 1933 a son of the late Edward and Judith (Drew) Perkins. Raised in North Hampton he graduated from Hampton Academy and then went on to enlisted in the United States Air Force. After his time in the Air Force he returned home and started his career as a firefighter, first serving 27 years at the North Hampton Fire Department, 11 of those years as the town’s first full time fire chief. He later worked for Continental Fire Truck of Hopkinton, MA, before starting his own business, W.D. Perkins Fire Pump Specialist of Merrimack in 1980. Wilbur was a member of the NH Fire Chief Association, where he served as past president, a charter member of Seacoast Chief, a lifelong member of the American Legion and Massachusetts Mechanic Association. He shared 54 years of marriage his late wife Mary E. (White) Perkins who predeceased him 2010. Surviving family members include his sons, Wayne E. Perkins and his fiancée Danita K. Marshall of Milford and Bruce S. Perkins of Merrimack; grandchildren, Amy Roberge and her husband Evan of Deerfield, Andrew Perkins and his wife Tiffany of Concord; step granddaughter Amanda J. Doggett of Raymond and daughter in law Florence Perkins of Raymond. In addition to his parents and wife, he was predeceased by his sons, Brian and Mark Perkins and step granddaughter Dixie L. Bregy. Visiting hours will be held from 5 - 8 PM on Tuesday, March 21, 2017 at the Remick & Gendron Funeral Home-Crematory, 811 Lafayette Road, Hampton. Services will be held at 11 AM on Wednesday, March 22, 2017 in the funeral home. Burial will follow in the Little River Cemetery, North Hampton. Relatives and friends are respectfully invited. In lieu of flowers donations may be made to the North Hampton Firefighters Association, 235 Atlantic Avenue, North Hampton, NH 03862.

Merrimack &#8211; Former North Hampton Fire Chief, Wilbur D. Perkins, 84, of Merrimack and prior 37 year resident of North Hampton died peacefully on Thursday, March 16, 2017 at his home. He was born in Worcester, MA on March 7, 1933 a son... View Obituary & Service Information

The family of Wilbur D. Perkins created this Life Tributes page to make it easy to share your memories.