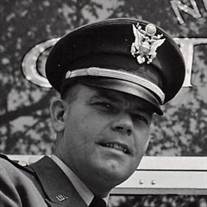 Seabrook - LTC Willard F. Boyle Jr., USA, Ret., 88 of Seabrook, died peacefully on March 9, 2020 with his family by his side. He was born in Washington, D.C. on July 14, 1931 the son of the late Willard F. Boyle Sr. and A. Pauline (Hayes) Boyle. Raised in Amesbury, he graduated from Amesbury High School with the Class of 1949, where he was a 3 sport athlete. Following graduation he attended the University of Connecticut and enrolled in their ROTC program, where he graduated with a bachelor’s degree. He went on to have a successful 22 year career in the United States Army where he and his family were stationed throughout the U.S. Bill served 2 tours during the Vietnam War as a Huey helicopter pilot, for which he received the Distinguish Flying Cross and Bronze Star Medal. He retired at the rank of Lieutenant Colonel. After his time in the service, Willard settled in Seabrook. He worked as a Manager for McDonalds Corporation and later as a History teacher at Winnacunnet High School, all while working various jobs at the Seabrook Greyhound Park. Willard was an avid sports fan who liked to stay busy. He enjoyed gardening and creating stained glass. Family members include his children, Donna Marconi and her late husband Michael of Newburyport, MA, Paula Mitchell of Dover, Valeri Moutsoulas and her late husband Charles of Peabody, MA and Willard F. Boyle III and his wife Deborah of Pittsburg, PA; step children, Christopher Lund and his wife Kim and Heather Lund; grandchildren, Matthew Marconi, Morgan Marconi and her husband Daniel Katz, Shaun and Nicole Mitchell, Stephenie Moutsoulas, Michael Moutsoulas and his wife Lisa, Nicholas Moutsoulas, Alexandra Bownlee and her husband Kenneth, Keynan and Hayleigh Boyle; great grandchildren Kaleb Boyle, Mary Moutsoulas, Emma Moutsoulas, and Michael Moustoulas. Bill will be sadly missed by his family, but never forgotten. Visitation will be held from 4-6 PM on Monday, March 16, 2020 in the Remick & Gendron Funeral Home – Crematory, 811 Lafayette Road, Hampton. Services will immediately follow the visitation at 6 PM in the funeral home. Burial will be at 11 AM on Tuesday, March 17, 2020 in the Hillside Cemetery, Seabrook. Relatives and friends are respectfully invited.

The family of LTC Willard F. Boyle Jr., USA, Ret. created this Life Tributes page to make it easy to share your memories.