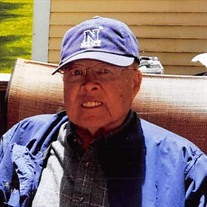 Stratham - CDR William "Allen" Hughes, USN Ret., 77, died on September 14, 2016 at the Hyder Hospice House in Dover of complications from an incurable rare blood/bone marrow disease, which he lived with for several years. He was surrounded by his loving family. Allen excelled in athletics and earned an Eagle Scout designation while growing up in Richmond KY. He attended the University of Kentucky in 1957-58 where he played freshman basketball and baseball. Following receipt of a congressional appointment, he attended and graduated from the Naval Academy with the Class of 1962. While at the Academy he excelled in basketball and football and was a member of the 1961 Orange Bowl Team with Heisman Trophy winner, Joe Bellino. Allen was extremely proud of having captained the Naval Academy basketball team where Navy won the 1960 Gator Bowl tournament, upsetting Florida and then Georgia Tech for the championship. He was selected to the Gator Bowl All Tournament Team. He proceeded to Miami to participate in the 1961 Orange Bowl against University of Missouri with President Elect, John F. Kennedy, in attendance. The football team had played earlier in the year before President Dwight Eisenhower in Annapolis. Upon graduation Allen assisted with coaching the 1962 Plebe Football Team. He then proceeded to Submarine School and served on USS Sabalo (SS 302) followed by a Weapons Officer tour on USS Von Steuben (SSBN 632). He left the submarine force and served as Operations Officer in USS King (DLG 10). He subsequently reported to Washington as a Weapons Systems Acquisition Manager living in Alexandria, VA and spent over seven years in program management at the Defense Nuclear Agency before retiring from the Navy. He served on a diesel submarine in the Tonkin Gulf off Haiphong during the 1964 USS Morton & Edwards incident near the beginning of the Viet Nam War and returned onboard a cruiser for the 1972 Christmas bombings, POW release and the clearing of mines from Haiphong harbor. Allen’s 21-year civilian career included engineering management positions with various Navy technical service companies, retiring as an Assistant Vice President from SAIC/AMSEC in 2005. He enjoyed tennis and golf at the Army Navy Country Club, traveling and visits with his five grandsons, one granddaughter and their families. He spent the late 70’s coaching and refereeing youth soccer in Alexandria. He was a member of American Legion Post 35 of Hampton and The Wardroom Club of Boston. His father, Charles “Turkey” Hughes, Athletic Director at Eastern Kentucky University for many years, his mother, “Peggy” Hughes and his brother, C. T. Hughes, predeceased him. He leaves his wife of 23 years, Carol (Bogret) Hughes of Stratham; his daughter, Megan Kreiter and family of Superior, CO; son, Trad Hughes and family of Dubai UAE; and his stepdaughter, Tracy (Radzik) Lukegord-Hayes and family of Hampton. A Graveside Service will full Navy Honors will be held at 11:30 am on Monday, September 19, 2016 at the New Hampshire State Veterans Cemetery, 110 Daniel Webster Highway, Boscawen, NH. Family and friends are respectfully invited. A Celebration of Life will be held at 1:30 pm on Sunday, May 7, 2017 at the Army Navy Country Club, 1700 Army Navy Drive, Arlington, VA 22202. Friends and associates are welcome. In lieu of flowers, memorial donations may be made to the Myleproliferative Neoplasms Research Foundation at MPN Research Foundation, 180 N. Michigan Avenue, Suite 1870, Chicago, IL 60601, by calling 312-683-7226, or online at http://www.mpnresearchfoundation.org/

Stratham - CDR William "Allen" Hughes, USN Ret., 77, died on September 14, 2016 at the Hyder Hospice House in Dover of complications from an incurable rare blood/bone marrow disease, which he lived with for several years. He was surrounded by... View Obituary & Service Information

The family of CDR William "Allen" Hughes created this Life Tributes page to make it easy to share your memories.

Send flowers to the Hughes family.