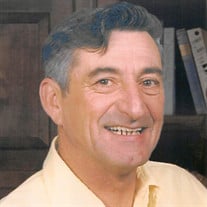 Amesbury, MA – William A. Baillargeon, 86, of Amesbury, former longtime resident of Seabrook, died peacefully on Friday, September 28, 2018 surrounded by family and the caring staff at Maplewood Center. He was born in Exeter, March 26, 1932, the son of the late Alfred and Alice (Carbonneau) Baillargeon. William lived a life of service and dedication to hard work. He was a proud veteran of the United States Navy where he served as a Boatswain’s Mate onboard the troop transport ship, USS Rockbridge, during the Korean War. After leaving the Navy he served with the Seabrook and Newfields Police Departments. Alongside his father, Alfred and brother, Duncan, William supported the Hampton Falls Fire Department. He later established and operated a construction company in Seabrook and later Dober Security Company of Hampton until his retirement in 1986. A member and former commander of the Raymond E. Walton American Legion Post 70 in Seabrook, William was also a member of Rockingham Lodge #22 I.O.O.F. of Hampton. William leaves three sons, Jeffrey Baillargeon and Leonard Baillargeon both of Seabrook and Gordon Baillargeon of North Carolina; his daughters, Margo Collins of Plaistow, Nicole Baillargeon of Fall River, MA and Melissa Daly of Rochester, NH; his sister, Anne Cronin of Attleboro, MA and several grandchildren and great-grandchildren. In addition to his parents, he was predeceased by his brother Duncan Baillargeon and infant daughter Misty. Visitation will be held from 10 AM to 12 PM on Saturday, October 6, 2018 in the Remick & Gendron Funeral Home-Crematory, 811 Lafayette Road, Hampton. A prayer service will immediately follow at 12 PM in the funeral home. Relatives and friends are respectfully invited. Burial will be private. In lieu of flowers, donations may be made to Compassus Hospice, 65 Lafayette Rd., Suite 302, North Hampton, NH 03862, online at www.compassus.com.

The family of William A. Baillargeon created this Life Tributes page to make it easy to share your memories.

Send flowers to the Baillargeon family.