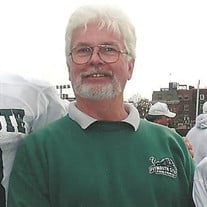 Seabrook, NH - Mr. William Joseph Brooks, known to all as “Bill”, age 78 of Seabrook NH, died unexpectedly on August 13, 2020, in Salisbury, MA. He was born in Dedham MA, on April 4th 1942, son of the late Alice C. Sears Brooks and brother to Rosalie Priore and husband Ron of Westwood and Kathleen Mangion of Haverhill. He grew up playing pony league and little league, and cherished his friendships with Bob Regan, Martin Cahill, Bob Nesteruke, Frank Lyons, Danny Peabody, Richie McElroy, Dennis Colch and many others. He graduated from Dedham High in 1959. After graduating, Bill went into the Air Force and served as air police. After the service, he joined the Massachusetts State Police. Bill was in the 47th State Police Training Class in 1966. Most of his assignment was in Troop A Foxboro and Framingham and at Troop "E" Massachusetts Turnpike. He retired as a Lieutenant after 20 years. Throughout his life, Bill enjoyed spending time with his many friends and was always happy to lend a hand or enjoy a beer. He was a passionate sports fan and in retirement was active in his community, coaching youth basketball at the Seabrook Recreation Center. He’ll be remembered by friends and family as being constantly on the move, always with a project to do and a smile on his face. He is survived by his six children, Garrett Brooks of Norton, MA, Lauren Gregoire of Whitinsville MA, Gregory Brooks of Jacksonville, FL, Georgianna Brain and husband Kevin of Norfolk, VA, William “JJ” Brooks of Seabrook, NH and girlfriend Laura, and Zachary Brooks of Portsmouth, NH; his grandchildren Brandon Gregoire, Chase Brooks, Cole Gregoire, and Cali Pepper; & many nieces, nephews, great nieces, great nephews, and extended family, including Cheryl Brooks-Pierro, The Sicard Brothers, and Gianna Pierro. Visiting hours are from 4 to 7 PM on Tuesday, August, 18th, 2020, in the Remick & Gendron Funeral Home-Crematory, 811 Lafayette Rd., Hampton NH, 03842. In lieu of flowers, donations in his memory can be made to Father’s Against Drunk Driving

The family of William J. Brooks created this Life Tributes page to make it easy to share your memories.

Send flowers to the Brooks family.