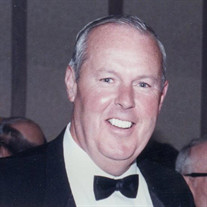 North Hampton – William R. Decker, 82, of North Hampton, passed away Monday, May 15, 2017 at Portsmouth Regional Hospital with his daughters by his side due to complications of heart disease. Bill shared 55 years of marriage with his late wife Dolores (Mita) Decker who predeceased him October 27, 2011. He was born in Gloucester, Mass., July 25, 1934 the son of the late Captain Andrew and Annie (Sheehan) Decker. Bill was a graduate of Gloucester High School with the Class of 1952 and was a veteran of the Korean War serving with the US Marine Corps. In 1960 he graduated from Springfield College, Springfield, Mass. and briefly taught and coached wrestling at the high school level before making a career change to business. He joined Liberty Mutual Insurance Company of Boston and worked in sales and marketing management reaching the level of vice president of the Liberty Life Company. He retired in 1992 with 25 years of service. He cherished the employees he mentored and his many colleagues became lifelong friends. His wife Dolores regularly accompanied him on his business travel throughout the US. Bill began playing golf at age 35 and it became a lifelong passion. He was a former member of Wentworth By The Sea Country Club and his home proudly displays many golf trophies. Bill and his wife Dolores enjoyed entertaining friends and family, travel, gardening and home decorating. Survivors include two daughters, Laura Fitzgerald and husband Mike of New Bern, NC, Carolyn Cebula and husband Gary of Wilmington, NC, five grandsons, Andrew Fitzgerald and wife Shannon of Fredrick, MD, Eric Fitzgerald, Kevin Fitzgerald and wife Jenna all of Denver, CO, Alexander and John Cebula of Tampa, FL, four great grandchildren, Connor, Katelyn, Owen and Meghan of Fredrick, MD, nieces and nephews, his sister-in-law, Frances Decker and brother-in-law, Kenneth Mita and his wife Gini and lifelong friend, Eileen Silva. In addition to his wife and parents he was also predeceased by his siblings, Priscilla D. Evans, Andrew Decker, II, Arnold Decker, and Harriet Decker and Eileen Silva’s husband, Ronald. Private services will be held at the convenience of the family. If desired memorial donations may be made to The First Tee of New Hampshire, 22 North Road, North Hampton, NH 03862 or the American Heart Association, P.O. Box 417005, Boston, MA 02241-7005 www.heart.org/. Arrangements are by the Remick & Gendron Funeral Home-Crematory, Hampton.

North Hampton &#8211; William R. Decker, 82, of North Hampton, passed away Monday, May 15, 2017 at Portsmouth Regional Hospital with his daughters by his side due to complications of heart disease. Bill shared 55 years of marriage with his... View Obituary & Service Information

The family of William R. Decker created this Life Tributes page to make it easy to share your memories.