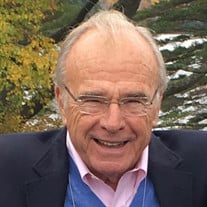 Gilford - William Eaton Ferry Jr., 79 Dies Leaving a Lasting Legacy in the Apparel, Retail, and Outdoor Industry. Bill, as he was known, spent a lifetime doing what he so passionately loved to do, helping lead well-known apparel and retail companies over six decades. He passed away on January 12, 2020, in Rye, NH, surrounded by his loving and supportive family. Bill was born on November 12, 1940, in Boston, MA, to William Eaton Ferry Sr., and Marjorie Smith Ferry Chadbourne. While living in Chicago, the family, which included Bill's sister, Martha Ferry Goodwin was born, and where Mr. Ferry Sr. worked at Dupont. The Ferry family would then move to Wilmington, DE, where Bill attended high school at Mount Pleasant High School, and where he captured the Delaware Wrestling State Championship. Bill graduated from Mount Pleasant High School in 1959. Following high school, Bill attended Franklin & Marshall College in Lancaster, PA. He enjoyed acting and being involved in school plays, and was a member of the national fraternal organization Chi Phi. Bill also participated on the wrestling team. It was during this time that he met his soon to be bride, Julia Scott Kurtz Ferry (Scottie) in her hometown of Lancaster. Scottie and Bill met when she was a senior at the Lancaster Country Day School. Her senior year was when Bill asked her on their first date. Bill graduated with a Bachelor of Arts degree in Economics in 1963 and would complete his advanced education in 1964 at New York University Leonard N. Stern School of Business with a Masters in Retail. In 1964, Bill started his professional career at DuPont in Wilmington, DE. He moved onto The Merchandising Group in NYC until 1967, then landed at Hooker Chemical, where he was based in Toledo, Ohio until1974. These various experiences helped to catapult Bill into the area of the "rags" and garment industry, his true passion, and in 1974 he became Vice President of his wife's family business, Woolrich Inc. Bill moved his family numerous times throughout his career, settling in the Northeast and the Midwest. With each new employment opportunity brought new and exciting personal achievements as well. In 1972 the eldest of his two children, Charles Chadbourne Ferry, was born in Trenton, NJ. Two years later, in 1974, his daughter Taylor Anderson Ferry Hindle was born in Toledo, OH. Bill would become a proud grandparent to five beautiful grandkids, Tripp, Will, Gar, Piper, and Kaitlyn, who all reside in New England. Following his time at Woolrich, an opportunity to work for Lands' End, the Dodgeville based catalog company, came calling. On two different occasions Bill worked for Lands' End. From 1982 to 1986, Bill was Executive VP of Merchandising and helped take the company public. Bill was also Vice Chairman from 1995 to 2000. In between his Lands' End experiences, Bill moved his family to Amherst, NH, where he was President of Eastern Mountain Sports, a Peterborough, NH based company. Bill worked for EMS from 1986 to 1995. During this time, he led the company growth from 24 to 86 stores covering most of the US and sparked an exploratory international expansion. EMS was viewed as one of the leading outdoor companies. Throughout his distinguished career, Bill served on many company and non-profit boards: Gemplers in Madison, WI, Riverview School in East Sandwich MA, Marmot in Santa Rosa, CA, Marker LTD in Salt Lake City, UT, Eagle Creek in Vista, CA, Franklin & Marshall College in Lancaster, PA, Woolrich, Inc in Woolrich, PA, Outdoor Research in Seattle, WA, Duluth Trading Company in Madison, WI, and Youngone Corporation, in Seoul South Korea. Bill is survived by his wife Scottie (Kurtz), son Chad Ferry - his wife Sandi and their daughter Kaitlyn, daughter Taylor (Ferry) Hindle - her husband Ray, and their four children Tripp, Will, Gar, and Piper. In addition, many nieces and nephews. Bill was predeceased by his sister Martha. A celebration of Mr. Ferry's life will take place at the Gilford Community Church, 19 Potter Hill Road, Gilford, NH 03249 on February 1, 2020, at 11 a.m., followed by a reception at Governor's Island Club, 500 Edgewater Drive, Gilford, NH 03249. In memory of Bill sartorial splendor, please dress in colors. Burial will be private. In lieu of flowers, donations in memory of Bill may be made to Beacon Hospice, 25 New Hampshire Avenue, Suite 272, Portsmouth, NH 03801.

Gilford - William Eaton Ferry Jr., 79 Dies Leaving a Lasting Legacy in the Apparel, Retail, and Outdoor Industry. Bill, as he was known, spent a lifetime doing what he so passionately loved to do, helping lead well-known apparel and retail... View Obituary & Service Information

The family of William E. Ferry Jr. created this Life Tributes page to make it easy to share your memories.

Send flowers to the Ferry family.