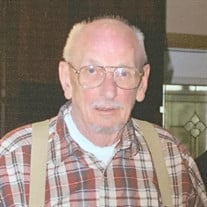 Hampton – William Donald French, 83, of Hampton, passed away suddenly at his home on Sunday, March 24, 2019. Bill was born in Saugus, MA on February 16, 1936 to the late Earle M. and Mabel T. (Harding) French. He was predeceased by his beloved wife of nearly 50 years, Rachel A. (Iverson) French who passed in 2015. He was a proud veteran who served his country honorably with the United States Air Force and the United States Marine Corps. He spent time working in the private sector and eventually landed as a welder at the Portsmouth Naval Shipyard for over 25 years. He retired from federal service in 1996 with Rachel following several years later. During their retirement years, they enjoyed traveling, camping, country fairs, the seacoast beaches and of course spending time with their beloved grandchildren and their golden retriever, Missy. They often made the trip up to Fryeburg, Maine in the fall for the annual Fryeburg Fair, amongst other local fairs throughout southern New Hampshire. They loved the seacoast community and its proximity to the mountains, the coast and all the sights it had to offer. Without a doubt, watching and following New England sports teams were one of his favorite past times, being a Celtics, Red Sox, Patriots and Bruins fan. Bill had a kind soul and wonderful sense of humor and always had a smile on his face. He enjoyed being at home with a good book or completing the daily crossword puzzle, while soaking up some sunshine in the backyard. He is survived by his son, James H. French, his wife Heidi of Portsmouth and their children Candace and Danielle French, his daughter, Beverly Bell, her husband Kenneth of Nottingham and their children, Chelsey, Kenneth and his wife Samantha, Gregory and Jordan Bell as well as his two great grandchildren. Services for Bill will be private. Arrangements are by Remick & Gendron Funeral Home – Crematory, Hampton. If desired, memorial donations may be made to the Granite State YMCA locations/seacoast.

The family of William D. French created this Life Tributes page to make it easy to share your memories.

Send flowers to the French family.