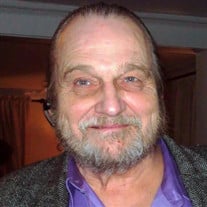 North Hampton – William John Gott, Jr., of North Hampton, passed away peacefully on Wednesday, October 9, 2019 at the Portsmouth Hospital after a brief illness. Bill was surrounded by the family he loved so dearly. Bill was born on June 19, 1948 in Bangor, ME, the only son of the late William J. and Barbara (Hayes) Gott, Sr. Bill was raised in Maine and attended Husson College. He always had a love of politics and was very involved in his high school years, organizing political events, meeting and working with a lot of well-known Republicans. He married Wendy Crouse in 1986 and after living in Maine, New Hampshire and Florida, returned to New England in the mid-1990s and settled in Hampton to raise his family. A proud veteran, Bill honorably served his country with the United States Army during the Vietnam War where he was awarded the Bronze Star. After his time in the service he held a number of positions with several different companies but his entrepreneurial spirit was his driving force. He always had an idea in the works, was very successful and a great provider for his family. He was “married” to his kids, loved them more than anything in the world, and the times with them were the happiest moments of his life. Over the past decade Bill was devoted to the care and recovery of his eldest daughter Myla after she sustained a traumatic brain injury on January 28, 2009. He leaves behind his daughters, Myla Gott of North Hampton, Kira McKay and her husband, Hunter of Concord and Brie-Anna Gott of North Hampton and his son, Graylin Gott and his longtime girlfriend, Danielle Fleming of Newburyport, MA. He is also survived by his grandchildren, Asa Small and Olivia and Liliana Duckworth, his sister, Tina Bickford and her husband, Chris of Chelsea, ME and the mother of his children, Wendy Gott, of Portsmouth. In addition to his parents, Bill was predeceased by his sister, Donna Allen. Friends and family may visit from 2 to 5 PM on Saturday, October 19, 2019 in the Remick & Gendron Funeral Home – Crematory, 811 Lafayette Rd., Hampton. Services will follow the visitation starting at 5 PM in the funeral home. Burial will be private in the New Hampshire State Veteran’s Cemetery. In lieu of flowers, Bill would want donations to assist Myla’s, continued therapy. Gifts may be sent to Myla Gott’s Benefit Fund, c/o Provident Bank, 1 Provident Way, Seabrook, NH 03874.

North Hampton &#8211; William John Gott, Jr., of North Hampton, passed away peacefully on Wednesday, October 9, 2019 at the Portsmouth Hospital after a brief illness. Bill was surrounded by the family he loved so dearly. Bill was born on June... View Obituary & Service Information

The family of William J. Gott Jr. created this Life Tributes page to make it easy to share your memories.

Send flowers to the Gott family.