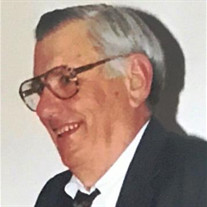 Rye - William E. “Bill” Hansen, 80, of Rye, passed away peacefully on August 1, 2017 at Portsmouth Regional Hospital. He was born in Portland, ME on November 23, 1936 a son of the late Earl and Teresa (Qualey) Hansen. He was the oldest in a family of eight boys. In 1941, his family moved to Bangor, ME where he attended John Bapst High School. He was a graduate of the University of Maine – Orono (Class of 1959). His first job out of college was with Beloit Iron Works in Beloit, WI. It is there that he met Barbara and married in May of 1960. Following three years in the US Army, Bill and his family returned to Beloit in November of 1962. In 1971, he moved his family to Norwood, MA where he was employed by Butler Automatic. Bill moved his family to Rye in June of 1982 and finished his career at IMC Magnetics and Thompson Central Arms. He is survived by Barbara, his wife of 57 years, and his five children: Mary and her husband Jeff Nawrocki of Newcastle, Bill and his wife Patty of John’s Creek, GA, Margaret and her husband Bob Dullea of Brentwood, Joe and his wife Tammy of Gorham, ME and Karen and her husband Larry Berrigan of Westford, MA. Bill was blessed with fifteen grandchildren: Ryan, Nathan, Sean, Madison, Taylor, Nora, Ryker, Rachel, Alexx, Marika, Molly, Grace, John and Joey. He is also survived by his seven brothers: John, Jim, Peter, Dick, Bob, Greg and Paul. Visitation will be held from 2 to 4 PM on Sunday, August 6, 2017 in the Remick & Gendron Funeral Home - Crematory, 811 Lafayette Road, Hampton. A mass of Christian burial will be celebrated at 10 AM on Monday, August 7, 2017 in St. Theresa Church, 815 Central Road, Rye Beach, NH 03870. Burial will follow in the Central Cemetery, Rye. In lieu of flowers, donations may be made to New Generation, 368 Portsmouth Avenue, Greenland, NH 03804.

The family of William E. "Bill" Hansen created this Life Tributes page to make it easy to share your memories.

Send flowers to the Hansen family.