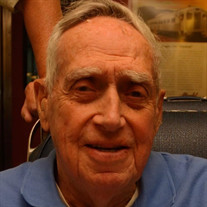 Hampton – William X. Pray, 99, of Hampton, died Friday, January 24, 2020 a day shy of his 100th birthday at Exeter Hospital. Mr. Pray was born in Chelsea, MA. January 25, 1920, the son of the late Jesse F. and Margaret M. (Carruthers) Pray. Mr. Pray was raised in Chelsea and Malden, MA. He attended Saint Rose’s School Class of 1935 in Chelsea and Malden Catholic High School. He was a 1939 graduate of Malden High School and a graduate of the Franklin Technical Institute. He was a veteran of the US Navy serving both as a Pharmacist’s Mate assigned to the US Marine Corps during WWII and Hospital Corpsman at the Chelsea Naval Hospital during Korea. Mr. Pray worked for the National Radio Corporation of Malden before and after WWII and worked 18 years as a draftsman for the General Electric Jet Engine Division at the Lynn Riverworks Plant from 1964 until his retirement in 1982. He had been a Hampton resident since 1959 coming from Malden. He was a member of the Hampton’s American Legion Post 35, a communicant of Our Lady of the Miraculous Medal Church, and a member of the Holy Name Society, the Men of Saint Joseph, Knights of Columbus Council 5093, and the Ancient Order of Hibernians. He was predeceased by both his wife, Dorothy R. (Tremblay) Pray, in 1992 and his sister, (Harriet V. Pray) Sr. Mary Evangelist, RSM, in 1995. Family members include three sons, William P. Pray of Salem, MA, Richard G. Pray of Hampton, David M. Pray of Raymond; a daughter, Barbara E. Ryan of East Wakefield, NH, four grandchildren and eight great grandchildren.. Visiting hours will be from 5-7 P.M. Monday, January 27, 2020 at the Remick & Gendron Funeral Home- Crematory, 811 Lafayette Road, Hampton. A mass of Christian burial will be celebrated at 10 A.M. Tuesday, January 28, 2020 in Our Lady of the Miraculous Medal Church, 289 Lafayette Road, Hampton Burial will follow in the High Street Cemetery. Relatives and friends are respectfully invited. If desired, donations may be made to the Sisters of Providence Mission Advancement office, 1 Sisters of Providence Road, Saint-Mary-of-the-Woods, IN 47876.

The family of William X. Pray created this Life Tributes page to make it easy to share your memories.

Send flowers to the Pray family.