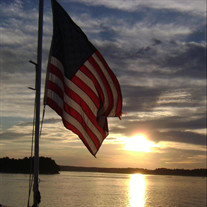 Seabrook - William H. “Red” Schofield, Jr., 92, of Seabrook, died Saturday, March 7, 2020 at his sons home in Lebanon, ME after a period of failing health. He was born December 21, 1927 in Malden, Mass., the son of the late William H. and Ethel (Hill) Schofield. Red was raised in Malden, Mass. and was a veteran of WW II serving with the US Coast Guard and later with the US Navy during the Korean War. Mr. Schofield was employed as a mechanic at General Electric in Lynn, MA for the turbine division for 36 years. He lived in Hampton from 1972 to 1998 before moving to Seabrook. He was a member of the Raymond E. Walton American Legion Post 70. He was the husband of the late Laura C. (Marshall) Schofield who predeceased him in 1974. He leaves his life partner of 46 years Rita Knowles of Seabrook, his son Mark Schofield and his wife Sue Ann of Lebanon, ME, his daughter Susan Schofield of Exeter, his sister Doris Sweeney of Long Island, NY, 9 grandchildren, several great grandchildren, several great grandchildren, 2 nieces, his partners children, Denise, Lee and Brian Bitomske and Charles Knowles. In addition to his wife and parents he was predeceased by his partners children, Chuckie and BJ Bitomske. Visiting hours will be from 4-7 P.M. Friday, March 13, 2020 at the Remick & Gendron Funeral Home-Crematory, 811 Lafayette Road, Hampton. A graveside service will be held at 10 A.M. Saturday, March 14, 2020 in the High Street Cemetery, Hampton. Relatives and friends are respectfully invited.

The family of William H. "Red" Schofield, Jr. created this Life Tributes page to make it easy to share your memories.

Send flowers to the Schofield, family.