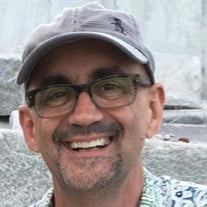 North Hampton – William Patrick Sullivan, 61, of North Hampton, passed away peacefully on Monday, June 4, 2018 at home surrounded by family after a courageous 2 year battle with stage 4 brain cancer. Sully was born on June 2, 1957 in Gilman, VT, A son of the late William T. and Patricia A. (Boyle) Sullivan. Sully was raised in Gilman and graduated from Concord High School of Concord, VT. He had worked and lived in Oregon and Virginia before relocating to New Hampshire where he took a position as Innkeeper at the Franconia Inn in Franconia Notch. While at the inn, he met Elizabeth Ann Rockwell and they were married in July of 1988. He and Liz moved to the Seacoast in 1993 and opened Hampton Vision Center, a business he continued to operate until falling ill. Sully enjoyed hiking in the White Mountains and fly-fishing in British Columbia in addition to being an accomplished photographer. He loved to travel and he and Liz had visited many places around the globe including a hike to the Mt. Everest Base Camp. In addition to Liz, his wife of 30 years, Sully is survived by his sister, Gayle MacDonald and her husband, Stephen of North Danville, VT, his sister-in-law, Joann Sullivan of Waterford, VT, his nieces and nephews, Tammi Cady, Troy Sullivan, Rob Briggs and Kimmie Augeri and many cousins. He was predeceased by his parents and his brother, Timothy Sullivan. Friends and associates are invited to a Celebration of Life on Saturday, June 16, 2018, from 12 to 3 PM at the Hampton Vision Center, 865 Lafayette Rd., Hampton. Burial will be private. Assistance with arrangements is by the Remick & Gendron Funeral Home – Crematory, Hampton. In lieu of flowers, take that special someone and explore the World with them OR give to the Sherpa Family Fund - Global Giving www.globalgiving.org/projects/sherpa-family-fund.

The family of William P. Sullivan created this Life Tributes page to make it easy to share your memories.