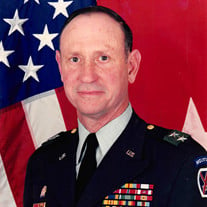 Hampton - Major General David Custis Meade (U.S. Army, Retired) of Hampton and Vero Beach, FL passed away peacefully on October 9, 2019 at Watson Fields Assisted Living Facility in Dover, New Hampshire after a lengthy period of failing health. General Meade was born in Washington, D.C. in 1940, the son of Custis Meade and Lilla (Lyman) Meade. He was beloved and adored by his wife Marina (Kalergis) Meade of Hampton, N.H. General Meade graduated from Dickinson College in 1962, on whose Board of Trustees he previously served and from whom he was awarded the Distinguished Alumni Award for Professional Achievement in June 1995 and an Honorary Degree of Doctor of Liberal Arts. In 1995, he received his Masters Degree in Education from the University of Virginia on whose Military Science Faculty he had served. He also is a graduate of Armed Forces Staff College and the U.S. Army War College. He entered the US Army through the Dickinson College Army ROTC Program as a 2nd Lieutenant of Artillery to begin his long and distinguished military career. He rose rapidly through the ranks over the next 33 years, serving in every commissioned title and rising to the rank of Major General. He retired from the Army in 1995 as a Commanding General of the 10th Mountain Division at Fort Drum, New York. During his career General Meade served in peace and war as in conflicts around the world, including Vietnam, Somalia, Haiti, Grenada and Panama. He received many awards including the Defense Distinguished Service Medal (2), Distinguished Service Medal, Legion of Merit (4), Bronze Star, Meritorious Service Medal (2), Army Commendation Medal, Meritorious Unit Commendation, National Defense Service Medal (2), the Air Medal, Armed Forces Expeditionary Medal, Vietnam Service Medal (2), the Vietnam Gallantry Cross and Parachutists Badge as well as numerous other personal and distinguished awards and citations. General Meade was known for his strong and compassionate leadership qualities that included all of the Army core values of: Duty, Honor, Integrity, Loyalty, Courage, Respect and Service. “Climb to Glory” is the 10th Mountain Division motto and General Meade exemplified that in every sense of his life. He embodied the Army spirit to take care of his soldiers and accomplish the mission. He was a born leader, soldiers followed him naturally. He had a brilliant mind and was courageous and steadfast with an inner fortitude to “always do the right thing.” It was not just words; he demonstrated his quality leadership skills and values in all of his actions and it was evident to all that knew him and served and worked with him. He was a true “soldier’s general” and he loved his soldiers and his country. He led by example and his officers and men tried their best to live up to the high standards of that example. No situation, tactical or otherwise, was so complicated he could not break it down to what needed to be done in simple, straight forward terms. His men loved him. As has been said by a senior officer with whom he served, “Dave had a heart of gold and was ever loyal to those with whom he served.” In addition to being a great soldier, General Meade was also a devoted husband and a loving father to Mary Meade Sampson (Steve) of Ashburn, VA, David Jr (Tracy) of Falls Church, VA and Ted (Brittany) of Annapolis, MD. He was the proud “PAPA” of Francie, Caroline and Lucy Sampson, David III, Ben and Sara Meade. Also, General Meade is survived by his brother Richard of Stockton, Maryland, his cherished cousin Frank Lyman and wife Sandy of Bridgewater, New Jersey as well as his former wife Frances Meade, the mother of his children. He had a sense of humor that touched all who knew him and also was a talented musician and loved to sing to everyone’s delight. He loved boating, skiing, tennis, golf, and fishing. Overall, he was a talented athlete. General Meade and Marina divided their time between NH and Vero Beach, FL. They spent many wonderful days on their boat and on the beach. They traveled extensively during their marriage but always returned to the New Hampshire Seacoast and called it home. They loved the ocean and the scenery, but most of all the many valued friends they made along the way, especially from the Portsmouth Yacht Club and Abenaqui Country Club. Dave loved all animals and never met a dog or cat he didn’t have fun with. ‘Sarge’, his loving English Labrador, was always by his side and he could be counted on to keep a watchful eye on his master. The family especially extends their heartfelt appreciation to the staff at Bellamy and Watson Fields in Dover, NH who cared for Dave with the highest respect and with consideration for his comfort and well-being. No one could have done it better and those of at Bellamy and Watson Fields will never be forgotten. Visiting hours will be from 3 to 7 PM on Thursday, October 17, 2019 in the Remick & Gendron Funeral Home – Crematory, 811 Lafayette Rd., Hampton, NH 03842. The funeral service will be at 11 AM on Friday, October 18 at St. John’s Episcopal Church, 101 Chapel St., Portsmouth, NH 03801. Burial with full military honors will be in Arlington National Cemetery at a later date. Flowers will be accepted but if desired, memorial donations may be made to the Watson Fields Employee Fund, 201 Watson Rd., Dover, NH 03820 or to a charity of one’s choice.

The family of MG David C. Meade created this Life Tributes page to make it easy to share your memories.

Send flowers to the Meade family.