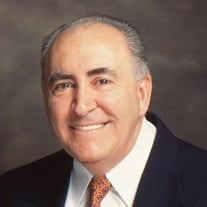 Hampton – Michael A. Spinelli, 88, a native of Lowell MA, passed away peacefully on Saturday, February 6, 2021 surrounded by his loving children and niece, Mary Jane LaPlante. He was born in on July 17, 1932, a son of the late Angelo R. and Lucia (Sdoia) Spinelli. Born and raised in Lowell, he graduated from Lowell High School with the Class of 1949 and Northeastern University in 1955, with ROTC honors. He then went on to proudly serve as 1st Lieutenant in the United States Army stationed in Germany with the 25th Signal Battalion. A tireless hard-working man from the industrial city of Lowell MA having “run a hardware store” at the age of nine, later going on to be a founding shareholder of a major regional bank: Enterprise Bank & Trust Co. “While we were heading to the park to play ball, Mike was going off to work" said his late brother Leonard Spinelli, who would also become a prominent Lowell businessman. After the Army, Mike started Merrimac Travel in 1959 on Appleton Street shortly thereafter built his own building on Church St; “Mike Spinelli’s Merrimac Travel”. His crowning achievement was being elected president of the American Society of Travel Agents (ASTA) in 1996. Mike raised his family in Chelmsford then living in Windham and finally in Hampton after selling the coastal “Tower House” he built in Rye. He is dearly remembered at his two Hampton Churches, Our Lady of the Miraculous Medal and Trinity Episcopal Church where he conducted bible study classes and generously donated his time with and support of its parishioners. Mike was a primary benefactor of Timkatec trade school and orphanage in Haiti. He enjoyed dancing, and singing and his congenial smile, wit and candor will always be remembered to those who knew him or met him just for a moment. In his final years he lived with his daughter and son and had many helpers who he enjoyed taking to Five Guys or Al’s Seafood. Relatives remember his energy, constant state of thought, deliberate walk and determination always trying to figure out new and better ways to do things. Surviving family members include his children, Susan Spinelli and her husband John Tyson of Hampton, Michael Spinelli Jr. and his wife Gleicy of Hampton and David Spinelli and his wife Sandra of Metuchen, NJ; grandchildren, Julianna, Lucas, Layla, Julian, Connor, Kayla, Carly and many nieces and nephews. In addition to his parents, he was predeceased by his siblings, Emily Antifonario, Victoria Stamp, Virginia Pasquale, Edward Spinelli, Samuel Spinelli, Louis Spinelli, Leonard Spinelli and grandson, Carter Tyson. A private mass of Christian burial was celebrated at Our Lady of the Miraculous Medal Church, Hampton. A graveside remembrance and burial at Locust Grove Cemetery in Merrimac, MA will be held later this year. In lieu of flowers, donations may be made to Our Lady of the Miraculous Medal Church , 289 Lafayette Rd, Hampton, NH; the Michael Jon & Eric Ryan Rush Foundation for Children , 314 Lafayette Road Hampton, NH or Trinity Episcopal Church, 200 High St.Hampton, NH 03842

Hampton &#8211; Michael A. Spinelli, 88, a native of Lowell MA, passed away peacefully on Saturday, February 6, 2021 surrounded by his loving children and niece, Mary Jane LaPlante. He was born in on July 17, 1932, a son of the late Angelo... View Obituary & Service Information

The Spinelli family created this tribute for people to share their memories, funny stories and pictures for all to remember the great man Michael was.

Send flowers to the Spinelli family.